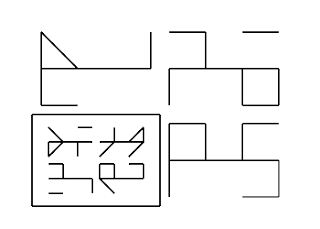 Hail Santa at Terminal Velocity invented UDEL, or “Uniform Data Entry Language,” a conlang for Mothership and other sci-fi games. I’ve written this tool to help write it, and while it’s not feature-complete, I thought I’d better release something soon rather than tinker with it forever.

It’s pretty straightforward to use: type the words you want in the box, and click the link to draw them. Words connected by underbars (“_”) will be drawn in a cartouche (i.e. proper nouns). Numbers are drawn correctly, but you’ll have to “pre-process” them, which is to say, break them into groups of 3 digits, etc. If a word is not on the word list, it will be drawn as a blank stave.

Right now the tool is hosted on a Blogger “Page” instead of a proper post, because making it a post somehow hides all the other posts on my blog and I have no idea where to start with that.

Play with it, use it, test it, break it, let me know what you think!