What values are even possible?

The minimum difference between the two is a form of the well-studied partition problem: given a set of numbers, can it be split into two sub-sets with equal sums? A heuristic method that can usually2 find the smallest difference between our two subsets (and therefore if they can be equal or not) is called the Karmarkar-Karp method, which works as follows:

Note that we didn't actually find what the partitions are, only what the difference between them is here. I hope this is clear enough, but I'm also sure that clearer explanations can be found with minimal searching.

With some wrangling, we can produce this lovely chart, where a heavier hexagon is a more likely pairing.

Hexagons are elegant, as odd/even combinations that cannot occur are skipped naturally.

From this, it looks like the system gives a lot of flexibility in assigning scores to your attributes.

What Values are Likely?

I have a concern about this mechanic though: if you give someone a range of numbers, and tell them to pick one, they will tend to pick in the middle3. If a player is dead-set on being boring, how boring can they be? 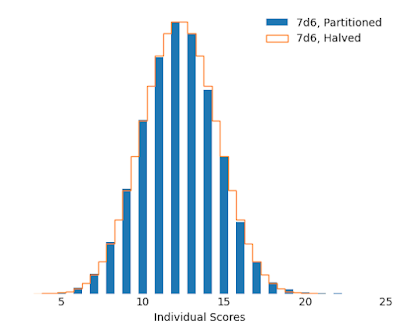 This doesn't look great, but PlanetNiles has actually already got us covered here:

Of course. I'd further consider including subsystems where the difference between attributes had some sort of effect. So favouring one over the other would prove beneficial in some way, or at least open up different options.

The strength of this mechanic then will rely on the strength of the system. Given the range of the first figure though, I have confidence that an interesting system could be built here.

What about other mechanics?

Suppose we were looking for a similar mechanic, except that it would force a difference between the attributes where possible. We might expect intuitively, that fewer dice and larger dice are harder to partition effectively. This table gives the probability of a forced difference (although does not consider the size of that difference). 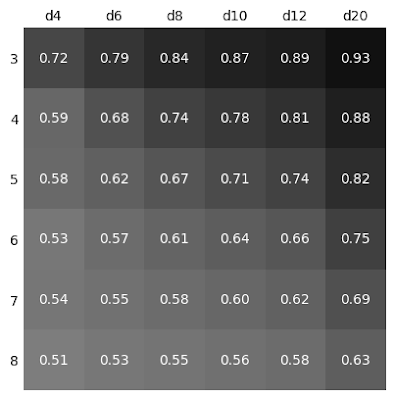 From this table, I thought I would look at 3d20, because it forces a difference the most often. The figures below have the same interpretations as the similar ones above, but for 3d20 instead of 7d6. 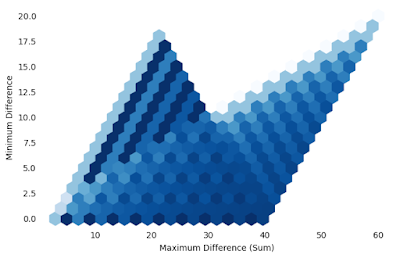 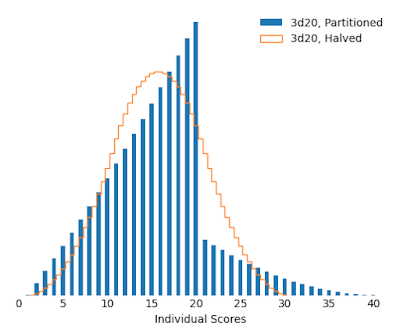 This was my first project using Python, and I think it's an all right language. It'll probably displace Octave in my repertoire, but I'm sure I'll be right back at Perl if I start doing string stuff again. The code's a bit janky, but you can take a look here.

1 “Asked” a little more directly this time, if only because I asked first.back

2 According to Wikipedia, this method is “bad for instances where the numbers are exponential in the size of the set,” so like, probably fine?back

3 I only know this anecdotally: if you tell a plant operator to keep some process temperature between a high limit and a low limit, without fail they will control it to the middle of the two. It makes sense to a person, but the optimal temperature is provably at one of the two extremes. Possibly, this is an extension of the anchoring effect.back

I added art to my entry in the Troika! Tarot Jam (11 days left at time of writing), and I now consider it finished. For these I wanted to communicate a lot of flavor without the standard explanatory preamble, to help them fit in such a small space. I think a lot of the backgrounds would be better remixed, but can stand alone as-is. I only hope that the illustrations aren't so specific that they interfere with anyone's interpretations of their own characters. 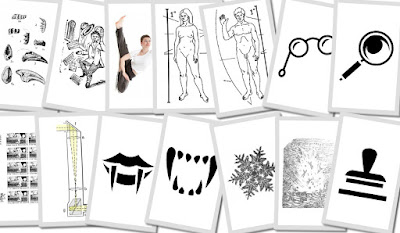 I don't technically have more time during social isolation because of work. But I still need things to occupy my mind, so here are some RPG-related activities:

There are also lots of other things: Please, stay safe and support each other.
Posted by iemcd at 5:12 AM No comments:

I promised my players I would “concoct some suitable fable” about atomic bees. It's not great prose, but I think it's functional. I didn't find a place to put laser-eyes in the story though, which I regret slightly. 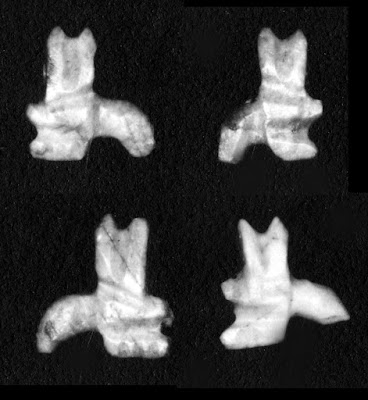 One spring, when Bear awoke, his mother was dead. Unsure what to do, he went to Mole’s house to ask how he could get his mother back, for Mole was very wise.

Mole said, “In my deep journeys, I have encountered rare bees, and you must seek them. Ask them for their honey, which can work miracles.”

Bear traveled through the wood, by paths known only to animals. But in the distance, a hunter saw him, and was afraid.

Bear came to a cave entrance he had never seen before, and descended. He walked for days and nights until he came to a rickety bridge across a deep chasm. Bear was afraid, for he did not know if the bridge could hold his weight. But running across, Bear arrived at the far side, the bridge collapsing behind him.

Continuing, Bear came to a cavern piled with glittering wealth: rubies the size of sunflowers, gold coins from nameless empires, and flatware of the finest aluminum. But Bear, his heart still heavy with grief, cared not for the riches therein. He stopped, and wept “Oh! That such riches could bring back to me my mother! But alas, I must continue.”

Finally, Bear arrived at a meadow, so deep beneath the earth that the sun could not have suspected it to be possible. The flowers there were wrought of precious metals and the grass crinkled gently in the breeze. Glowing gently in the distance was the hive of the atomic bees.

The bees buzzed, “Bear, why are you so far from home, where the only light is the glow of our hive?” “My mother is dead and I cannot go on without her,” Bear wept. “Feed her some of our honey, and it will bring life to her bones,” the bees buzzed, and they gave him a thick honeycomb to bring back with him.

When Bear returned to the cave of treasures, he froze. A fearsome serpent had made its home there and was presently asleep, coiled about a velvet throne. Bear waited outside the cavern, but was impatient. Unsure what to do, he tasted a drop of the honey. His fur stood on end like a frightened cat’s tail, and when he next looked for his reflection in the polished surface of a silver mirror, he could not find it. No longer fearing the serpent, he strode boldly into the chamber. The clinking of coins woke the serpent, but its cries of “who goes there?” and “what have you brought me for tribute?” went unanswered, for Bear had already passed through the chamber.

At last, he came to the chasm, but the bridge was still broken, and the rushing river below could barely be heard so long was the fall. He sat and he wept, for he had come so far, but could not complete his quest. After a while, he grew hungry, and tasted another drop of the honey. At this taste, his teeth hummed like the bees below, and he lifted off the ground. Swimming through the air he came to the other side of the chasm and continued on his way.

Climbing the passage for days and nights, Bear saw the sun in the distance and rejoiced, “soon I will see my mother again!”, and bounded into the wood. But in his haste, Bear did not see the the hunter had set a cruel trap for him, and his legs were taken off by jaws of iron. Bear cried out, “How cruel! To see the sun again, but nevermore my mother!” Remembering the miraculous honey, he tasted another drop. His whole body felt as though it were on fire, and in panic, Bear patted down his limbs. Now he understood that his limbs had grown back, and were as strong as they had ever been.

Rejoicing, Bear walked the hidden paths back to his home, but when he attempted to place a drop of the honey in his mother’s mouth, he found that none was left. At this, Bear wept, and cursed the bees below. Their gift had meant nothing to him. And he cursed so loudly that the bees below heard his curse and were saddened. The bees could share no more, or they would have none for themselves. So they resolved to never again share their honey and to defend it from all others, to spare us all the Bear’s pain.