The City of Emination, a Newer Crobuzon

Following Anne at DIY & Dragons, I've made a city out of some monsters (three "humanoid" minorities and three "bizarre" creatures). 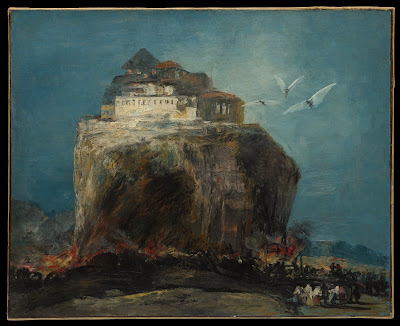 Recent refugees of distant war, they are not trusted. Good merchants, negotiators, tour guides. Some rumors about doppelgangers:

Unable to enter the inner city (which is hallowed ground) sprawl has forced the ghouls to integrate. Well-fed, they work as laborers. Otherwise they don't think so good and eventually go dormant. Those that let hunger drive their actions are swiftly dealt with.

Aristocratic upper-class, descended from celestials that followed Wormwood (they claim). The original celestials have long since moved on, leaving their progeny to manage the city.

In the city square, a mound of unrotting flesh. It spasms in the rain, and it's good luck if it twitches when you spit on it. It's unknown how it got there, as Emination is landlocked.

Millenia ago the angel Wormwood came to the mountains and there made itself a throne. It never speaks. It has not moved. Ancient pilgrims cut paths through the mountains from all sides, making Emination into an important crossroads.

Before the city were the mountains, and the elementals there. Taking the forms of rams and bears, they cut swathes through the outer city until they smash on the inner city walls, raining down charged earth. They always travel in a North-South direction and are more active around geomagnetic reversals.

There are also some entries from 2009 collected at The Book of Judd. Sphinxcorland (Sea of Stars) was a late addition (2010).

I entered the 200 word RPG challenge! I nitpick and revise constantly, so you can see the final version here, and past versions here (I am bad at GitHub). I wanted a widget to see my revisions side-by-side, so there's also this: 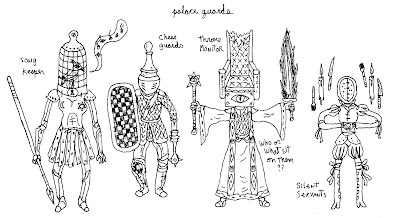 I've been working on the set-up of a specific palace, "The Palace Semi-Infinite". I had some wonderful playtesters who were willing to just mess-up a a palace, but I think something with more direction might have better staying power. I'm keeping the palace generation parts, but I may end up scrapping the game system for Into the Odd or something.

That said, the system is a svelte 61 words in the official word-counter, so it may make a reasonable base for future entries. I'm eager to see what other people have cooked up when I have a chance to sift through them.