The Mummy (1999) is not a good movie, and I rewatched it about a week ago. Although it is not good, it has some elements of a good dungeon in it. Here I have outlined what I can recall, at least without having to do any further research, and with some interjections.

"*" denotes elements drawn from The Mummy Returns (2001), which was also not a good movie. 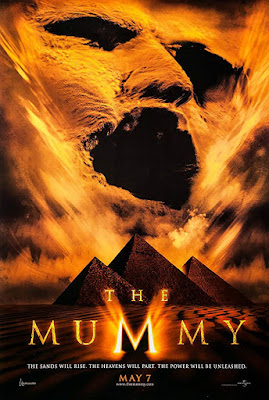 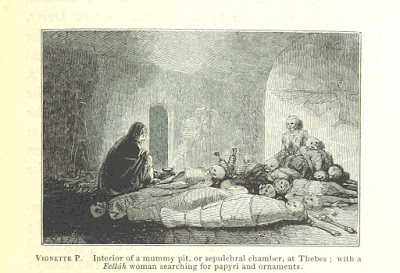 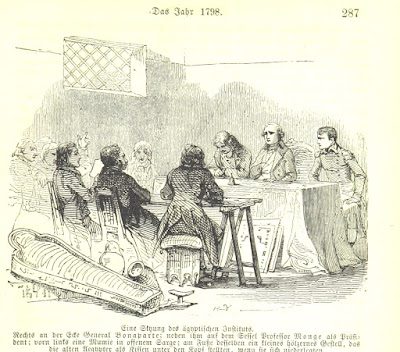 There are really only two ways to mess this up: self-destruct the dungeon or awaken Imhotep. Awakening Imhotep requires (1) opening his sarcophagus, and (2) reading from the book of death. This means that if it were run straight, paranoid players might not even interact with most of the stuff outlined in the movie, and instead they'd just haul off as much treasure as possible. This need not be disappointing: the mummy is bound to hunt those who opened the Cursed Box, a likely occurrence when looting. So if some scholar somewhere reads from the Book of Death (having been sold), and some archaeologist later opens up the sarcophagus (having been made aware of its location), then the mummy will start hunting the players. Alternatively, the mummy will just start messing stuff up on a regional scale via plagues. To force interactivity while the party is in the dungeon, just have the Americans make poor decisions while the party is there I guess.

Skerples proposes a collaborative dimension-hopping train. This is a quick brainstorm about trains, to help myself and others get started.

and maybe some thoughts about how they exist in an interdimensional infinite train that never stops (unless it does sometimes).

I would like to be sure that nobody thinks this is final in any way. I'm just trying to pretend that my Wikipedia binge was useful. I would hate for my interpretation of something to step on the toes of anyone else's great idea.

Hapaxes in the Ultraviolet Grasslands

At the beginning of the glossary of the Ultraviolet Grasslands (UVG), Luka asks: What have I missed? What needs more details? One way to find things that might be missing is to look for hapaxes in the work. This is not a good plan, but I tried anyway. 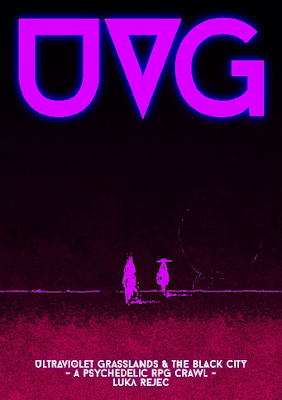 The following stuff was done in bash. I assume some familiarity with the commands, but comment on particular decisions that I made. It could be cleaned up.

First, we need the corpus as text so that we can work with it:

Then we clean up the text, and select all the words that only appear once:

Line breaks have been added for clarity. Parts of this bear closer examination:

This could be folded into the second sed statement, but it might be useful to keep but normalize double quotes for some purposes.


Quotes and hyphens at the beginning or end of a word are unlikely to carry much information, so they are stripped. This must happen after all the dash and quote characters have been "normalized".

Lots of the words that only appear once (6832 now) are not exciting. So we'll remove all the dictionary words:

Again, line breaks have been added for clarity. The full path to diff is specified because I've otherwise aliased diff to colordiff.

Of the 1612 hapaxes now left, it might be interesting to see how the characters are distributed.

This gives a table of character frequency:

The most common "character" is blank, and I suspect this is related to newlines (3223=2*1612-1). The other "blank" character appears to be a space that did not get stripped out initially, or which was later re-introduced. Perhaps it is some kind of other whitespace.

The most exciting thing in this table (I think) is the high occurrence of the hyphen. This means that roughly half of the "hapaxes" are likely composite words, and worth considering separately. For example:

Disregarding hyphens, these are all words a dictionary knows, but which Luka may be using in novel ways.

The remaining (unhyphenated) words, are a mixed bag. Take this random sampling:

Many of these just show the limitations of my dictionary ("pyrokinetic", "replicator"). Some of them show the limitations of the process ("10x", "jrientsblogspotcom"). Some are ad-hoc compound words ("dustland", "malicereflective"). The rest are either made-up, proper nouns, or typos, and I don't have a way to distinguish between them. It's possible that some of these were "created" by pdf2txt, which uses tunable heuristics to decide where to draw word boundaries.

If you're interested in playing with the lists, I've uploaded them here. They are split into "hyphen" and "nohyphen", and should be alphabetical.

I back Luka on Patreon at the $1/mo level, which grants me access to early drafts of his projects. The version used for this project was the most recent version available to backers, but it has not been edited.

UVG is currently running a Kickstarter for a fancy printed version with editing and more art. There's a link to a free version of the manuscript there too.