Sherlock Holmes Consulting Detective was released in 1982, apparently to great critical acclaim. I’ve been thinking about it recently because while I play it cooperatively, I think it would be a fine solo game, and solo gaming is having a bit of a moment. It’s also inspired many imitators. 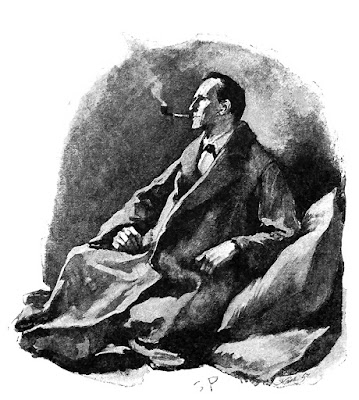 The game itself is very simple once you get the hang of it, and it only has a few components:

Nominally there is some kind of scoring and a competitive element. None of this is necessary in practice because most of the fun is simply in interacting with the game.

The game spawned several expansions and many fan-made cases (largely in French and Italian). These used to be hard to track down, but Space Cowboys has been doing really nice slipcase collections of the original cases, the expansions, and some new cases (they’re all standalone, so you can start with any particular box). They have a free case available online, and the fan-made cases all seem to be available on BoardGameGeek. Some blessed obsessives have sorted all the cases they could find into a huge spreadsheet.

The original authors of SCHD also made a noir game set in 1940’s San Francisco. I haven’t played this and it’s hard to find, but from what I can tell it adds some kind of fingerprinting mechanic and instead of a series of loosely linked cases it’s only one big case that takes multiple sessions to solve.

A fan of the original SHCD wrote their own from scratch, in the form of a pair of investigations in a Martian mining colony. They’re a couple bucks as print-and-play and skillfully executed. We had fun with them.

The obligatory Lovecraft adaptation, Arkham Investigator, was initially released as a pair of free print-and-play cases (the downloads don’t seem to work anymore). Later there was obviously a crowdfunding campaign to expand this to ~10 cases and the name changed to Mythos Tales. These are pretty fun though, and they introduce a few new mechanics:

It’s fun to see variations on the form, but on the whole I think they feel like attempts to reign in the emergent chaos of the original SHCD and discourage exploration and hunches.

People looking for similar games are often recommended these. I don’t think any of them plays exactly the same as SHCD, but they clearly all share a lot of DNA. T.I.M.E. Stories in particular is also from Space Cowboys.

When playing any Sherlockalike, I am frequently impressed by how much it feels like playing an open-world video game, but a full decade before such a thing could even have been be attempted. It even has the same failure modes! In 1991, someone ported the game to a computer with live-action acting, and apparently this also has been well-received. Somewhat more mystifyingly, someone has ported Arkham Investigator to Tabletop Simulator (I guess so you can all see the same books?).

Many people have attempted to write their own mysteries in the same vein as SHCD, and it’s easy to see the appeal. How might we go about doing this?

The community around the game has collected some tools you can use to set your mystery in the London of SHCD, like a reverse-engineered directory. And while the domain has lapsed, the Internet Archive has captured the remains of a community collection of other settings and scenarios.

Finally, we can take tools from mystery writing in other contexts, especially RPGs, to be sure we cover every angle. Fate reminds us that every suspect should have both a motive and an alibi. And the three-clue rule is pretty good for free-form RPG investigations, but it’s perfect for building the more constrained scenario of a Sherlockalike. 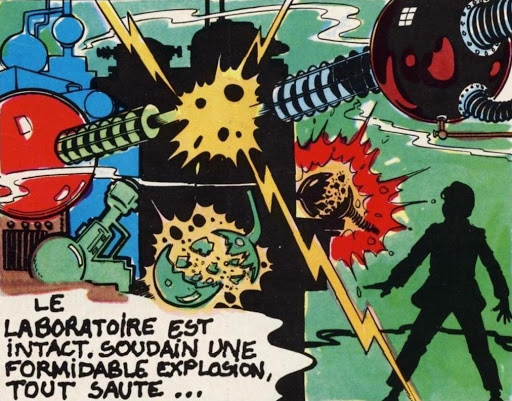 OTM recently “rebroadcast” a past favorite episode of mine about post-apocalyptic literature. Interviews are with Jeff Vandermeer, Claire Vaye Watkins, and Kim Stanley Robinson discussing the nature of horror.

An endless source of mood pieces and ruminations, HBM is parting ways with KCRW and seeking alternative funding. While they acknowledge this could mean a Patreon, they’re trying to get listeners to sponsor the podcast first. So that’s a potential avenue for promotions, shout-outs, or stranger ideas if you’re interested.

I heavily favor shorter podcasts, and these 10-minute faux PSAs about dungeon ecology with inexplicable running gags are really working for me.

Tunng is a long-time favorite band of mine and they’re releasing a podcast to accompany their new album.

Itch.io has a big problem with navigability. Some kind soul has made a dynamic page that lists all ongoing physical game jams. So if you’re in a slump, maybe try one of these.

Dan at Throne of Salt, my unrequited blogging rival, has a really good post on monsters. It neatly articulated some ideas I hadn’t been able to pin down, and I know I’ll be referring back to it.

Anne at DIY & Dragons has done another comprehensive dive into a single game mechanic, this time examining map-drawing-for-advancement. It’s really good and thought provoking, and might give you ideas about “fixing” the ranger class or running more cut-throat rivals.

Linden at Lapidary Ossuary reached out to me a while ago about hacking PALACE RUN for their own ends1, and now has a more finished game to show for it. I’ve really enjoyed seeing what elements they chose to keep and scrap, and what elements were added to the game (it has a lot more now). I’m eager to hear how it plays some time.

In 2012, I was (and still am) fascinated by the random table. A random table presents an exponential number of ideas in a linear space. Recombinant elements play in the gap between improv and rationalization, making each idea potentially unique and interesting. At the same time, raw probability can be leveraged against this massive scale to emphasize recurring themes or elements, building up a world solely through repeated use and implication.

So I took this fascination and built a bunch of tables that required rolling lots of dice to arrive at vaguely “fine?” results (if we’re feeling generous). Now I have the technology to easily automate these things, and I have done so. They might be more useful this way but mostly it was just fun to revisit them.

“Doc, get me some more of that bottle…”

“All this we know from the writings of…”

“I’ve called you all here because the holiday season is under threat!”

I’ve had the pleasure to run three new systems in the last year or so, and I’ve collected some notes here. 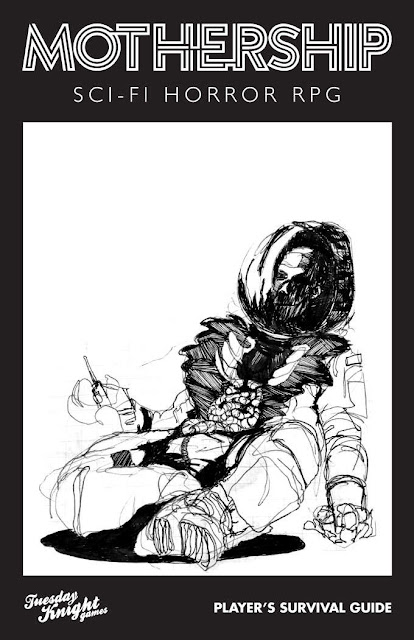 Mothership is a Science Fiction horror game in the vein of Alien or Event Horizon. The Player's Survival Guide is available from Tuesday Knight Games in print or from DriveThruRPG as a free PDF.

The players all said they had fun, so I’d try it again, but it definitely still feels like it’s in beta. 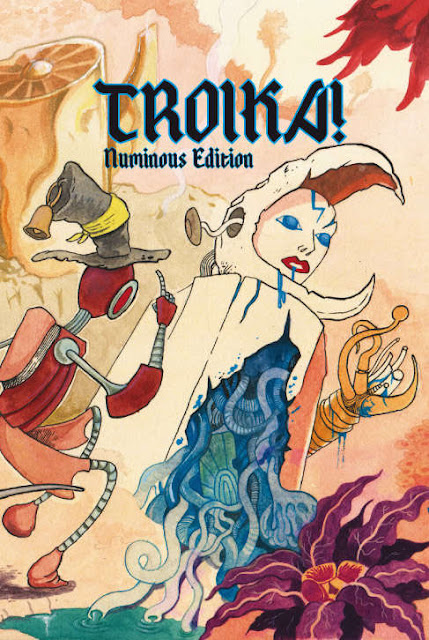 Troika! is some weird shit. You can get it from a few places, and there is also a free "demo" PDF on itch.io (it does not include the sample adventure Blancmange & Thistle). 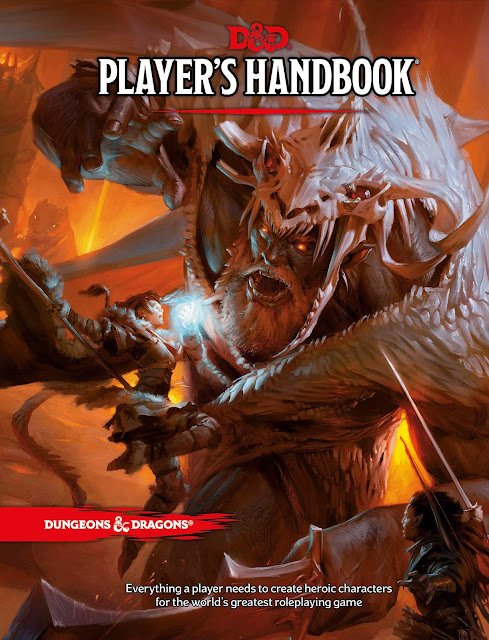 Dungeons & Dragons is a BFD. The fifth edition has a few starting points, but weirdly, it doesn’t look like you can buy the Player’s Handbook as a PDF.

Fifth edition is the easiest game to get a group together for. Because of this exposure, I’m sure I won’t say anything groundbreaking here.

There’s a lot of fun to be had with 5e, but I’m never sure how much is just the inherent fun of RPGs. Still, I think it’s got an undeserved reputation in some places.

1 There is a Warden’s (GM’s) guide planned, in the future. I hold out hope that book does for the GM what the survival guide does for players, but I’m less sure given the Twitter thread. There was definitely room to own that some parts of the rules were just less finished than others, but also everyone says dumb stuff on Twitter.back