5d6 but only count straights and matching

On 7 Feb 2020, diregrizzlybear on the GLOG channel of the OSR Discord asked1:

5d6 but only count straights and matching.

One solution might be to list all the rolls and score each one. This is probably feasible with a script. Instead, I enumerated the “hands”, and then found the probabilities of each of those.

Hands with No Degrees of Freedom

There are only two runs of five: ⚀⚁⚂⚃⚄ and ⚁⚂⚃⚄⚅. There is only one way to “make” each of these hands (“Count”), but because each die has a different face, there are 5!=120 possible orderings of each hand (Permutations).

There are 24 ways to score a run of three + double: 4 runs of three and 6 doubles. Depending on the doubled number, it may be possible to score this as other hands (run of four, triple), but this is never advantageous.

There are 30 ways to score a triple + double: 6 ways to score one and then 5 remaining ways to score the other (to exclude quintuples, which are already accounted for). As with run of three + double, we must account for duplicated numbers when counting orderings. There are then 5!/(3!*2!)=10 permutations of each.

Hands with One Degree of Freedom

There are 6 possible quadruples, with 5 ways to construct each one (again, to exclude quintuples). There are 5!/4!=5 permutations of a quadruple.

Hands with Two Degrees of Freedom

Hands with Three Degrees of Freedom

Other hands are not possible with 5 dice, but I did not bother to prove this more formally. Instead, I can show that all hands are accounted for: there are 6^5=7776 possible rolls (in order), and the sum of all the “Odds” of the above hands is 7776.

Now we can sum the odds by score (instead of by hand) and normalize them. This gives us the following distribution. 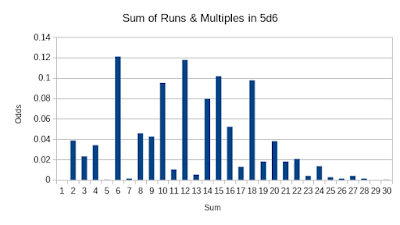 1 “Asked” is a strong word. Nobody asked for this.back

2 In the case of ⚀⚀⚁⚁⚂, both run of three and two doubles would score 6. For convenience, we will consider it as two doubles, because restrictions to exclude it are already part of the math for a run of three.back