I’ve enjoyed hearing how people have made use of Crisis on Christmas Prime in the last few weeks. I hope that by providing a brief sample adventure it might be more approachable. I rolled “Rag-tag adventurers are buying up candy!” on the crisis table, so that was the starting point. 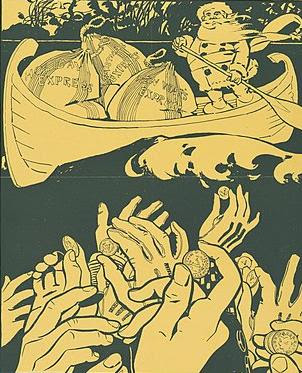 Ol’ Gran Yule has realized that Santa’s bag is a few thousand chocolate coins short. Can you find some before he leaves tomorrow?

Loosely, here are some places around town that players might think to look for coins:

All the coins were bought up by three people. Clues given by people who are out of coins:

These clues should point to the giant-barrows outside town.

Getting to the Barrows

This is an opportunity to check for random encounters, and to make sure everyone has taken precautions against the cold. Checking for encounters here reinforces the sense of distance between the town and the mountain, but I didn’t come up with a good table. Aeval and Valmr are out finding supplies and leads, so they might be encountered on the road.

Hewn into mountain base. Checking under snow on wall reveals a carving of a balance with a cross-legged figure on each side.

Drafty, tall, light filters in through natural chimney above. Snow and ice on the ground, large boulder in middle of room next to a chain extending from the floor to a massive wooden beam protruding from the wall on the right and leaning downwards. (Strength to move boulder.)

Mirror image of B, except with light filtering up from a large hole in the ground and no opening in the ceiling. (Chain and beam are too high up to be visible.)

Jorg is still meditating very hard and will attempt to ignore all disturbances (damage will rouse him). Some large coins and religious texts free for taking.

E - Order of the Blue Lantern

A band of adventurers between expeditions recuperate in the cave with their new pet, Shiny. Shyren is here, lounging and playing with it, and Istwell is meditating. Remaining coins needed are here. They know they are the mirror of whatever group of misfits finds them, and do not trust them. They would like Shiny to go to a good home, but currently could not lose it if they wanted to. Will not give up the coins until a suitable replacement foodstuff is discovered. All have stats as Knight of the Road. (Names are from The Black Hack.)

Despite the fur trim, her winter clothes are wildly impractical. Likes Shiny most of all the order, and is trying to teach it tricks.

Dressed in Saffron robes, meditating. Can be distracted by the religious texts in D or meeting Jorg. Believes that Shiny cannot see him because he is free from the cycle of birth and redeath, but in fact it is because he is blind (and sees only with his second sight). Knows Coal Resolve, Peace, and Zed.

A blinding pinprick of light dropped by the comet last week (Jeffry’s Comet). Its nature is unclear this young, but it could grow up to be another comet, a star, a galaxy, a nebula, or a whole new sphere. Shiny wants food and company. It has only a loose understanding of the people around it, but does try not to hurt anyone.

Shiny will consume any metal or alloy with a melting point below 700°C and be frustrated by metals it is not yet hot enough to consume.

Shiny can only see people whose eyes its light can reach, and will try not to be left alone.

The construction is a giant scale, currently weighted down by the boulder in B. If the boulder is moved, D is uncovered, and if a weight is added to the other side (in the warm room), E can be covered. It can be used as a trebuchet.

A mad marble astrologer in an observatory atop the mountain (“So close to the North Pole, the stars barely wobble at all!”). Everyone in town knows he’s there, but the Blue Lantern and Jorg do not. He can provide the following information:

Ideally, Gran Yule would have a unique gift for each of the characters. Recommend using Oddmas Oddities from The Hunt for the Great Goose.