Weird on the Waves (Review)

For a while now1, I’ve been dreaming of a maritime campaign, so I jumped on Weird on the Waves a year or so ago. It’s finally out, and it’s OK I guess. 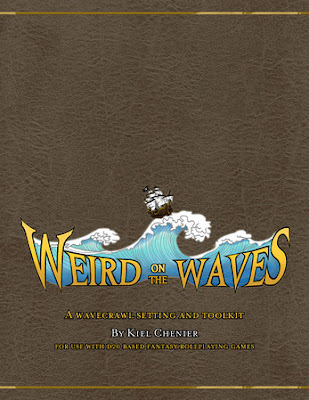 Weird on the Waves started taking pre-orders in 2017 as a LotFP-compatible product. It released in 2020 with generic D&D rules and notes for both “old school” and “new school” styles of play. It is available from Kiel Chenier’s itch.io page for $5.99 or from his other storefront (?) for $10.99. I don’t know what the difference is, but I got mine from itch.io if there is one.

The Elephant in the Room

Is Kiel Chenier cancelled? I don’t know man. If he’s a grifter, he seems benign. I did keep an eye out for any of the worst issues of Blood in the Chocolate and didn’t find them here.

The setting is the Caribbean in 1666, just before the “golden age of piracy”. But something is wrong: ships can travel to the Caribbean, but they can’t leave again. Instead, they find the islands surrounded by a sentient, hateful ocean full of strange and magical islands.

In addition to the setting pitch and the list of inspirational media, this chapter also explains basic D&D terminology in a way that’s not enough to be useful on its own, but enough that it might not match whichever system you are using. I would have preferred if it just owned OSR-style stats or 5e-compatibility, and didn’t feel the need to explain dice notation again.

This chapter also contains the part of the game that I’m most likely to borrow from: the basic “gameplay loop” of Weird on the Waves. That is the structure of finding a lead and following through and the procedures for sailing (like other games have procedures for exploring a dungeon or hexcrawling).

This chapter also suffers from system indecision. It has rules for things that your base game should already have2, like swimming, drowning, encumbrance, experience, etc. It has some suggested backgrounds, but without the mechanical heft of full 5e backgrounds, which is probably fine. It does also have rules the base game is unlikely to have, like firearms and a general-purpose “maritime” skill.

When characters die in Weird on the Waves, they can be brought back as a mermaid by the ocean, but without their memories. The mermaids here are suitably weird (we are treated to some of Kiel’s own art), and the bulk of the class is a d100 random-advancement table. It has details for “New School” and “Old School” games.

Maybe someone likes this, but for the most part I don’t care what the cost of a cutlass is, or the range of a blunderbuss compared to a musket, meticulously-researched though I’m sure it is. I appreciate the miscellaneous bonuses that come from ship’s pets, and I like that all the currency conversion rates are as simple as possible.

Rules for disease also end up in this chapter, because medicine is here. Fair enough.

Like equipment tables for boats. I would be perfectly fine with four basic ships and then keep the section with perks and customizations, but I assume that some people get a lot out of this.

I’ve read a bunch of ship combat rules, but I’ve never actually run any. This looks simpler than Pathfinder but more helpful than B/X, so that’s promising. Ocean hazards are also in this chapter, and I’m not sure why they’re not in the previous one instead.

Unlike the last section of Chapter 7 (“Ending Combat”), the title of this chapter refers to repairs after combat and also other parts of the sailing procedure that happen at the end of the day (e.g. morale checks) or the end of voyages (e.g. selling treasure).

This chapter has a setting overview (“the ocean is magic and hates you”) and details (“the government of Cuba”) and GM advice (“historical accuracy is overrated”). There are also rules for “Wave”, “Weal”, and “Woe” dice, which represent the will of the malevolent sea. Wave dice get added to the GM-side of contested rolls, Weal dice are added to player rolls (like inspiration maybe), and Woe dice are rolled for prompts to make a situation worse whenever a player rolls a natural “1”.

This chapter also has all the random tables, and they seem all right.

There are three kinds of monster in here: small or mundane animals, NPCs, and weird creatures. I could probably do without stats for “Cat” and “Dog”, especially because the important parts (bonuses for having a ship’s pet) are already elsewhere. I could also do without stats for “Sailor” and “Commoner”, because the base system should already have these, and I wouldn’t have to convert anything.

The weird creatures are one of the best parts of the book though, from a flavor standpoint. We’ve been told before that the sea hates humans and mocks them, but these creatures are actually showing that. The ocean learns that humans need vitamin C to survive, so it makes carnivorous citruses that suck vitamin C. Explorers start littering guns and ammunition, so the ocean induces crabs to become fortresses. It really captures the weirdness and hatred and confusion of the setting.

There are also some named NPCs (mostly historical figures) to serve as rivals, patrons, etc. These are fine and useful.

Chapter 11 - The Horrors of Pig Island

A short adventure, but probably solid. There are only so many ways to do a shipwreck adventure, but this one is cleaned up, with a little bit of Circe, and showcasing some of the atmosphere of the Weird on the Waves setting.

This adventure really showcases the sailing protocols, but doesn’t seem to add much. The PCs have a map, hire a crew, encounter some weird stuff, and hopefully return with the treasure. If nothing else, this is a useful illustration of how to use the tools in the book.

Would you like me to review your product? Here’s how to make that happen:

I would say that I could definitely get some use out of this, except for the accessibility issues. If I can’t search it or navigate it, it’s going to be more hindrance than help at the table.

Resources: Coconuts (Provisions)
Buried Treasure: Buried trove (Ivory (0.1 tons, 12000 gp), Fresh water (1 ton, 100 gp))
Noteworthy Feature: The island is cursed, causing all who dwell upon it to slowly be turned into different kinds of fish people. The transformation is slow, causing anyone who stays there longer than a month to develop fishy traits.

Resources: Coconuts (Provisions)
Buried Treasure: Sealed crate of textiles (175 gp)
Noteworthy Feature: Site of a cursed item. A random cursed item is hidden somewhere on the island. The item is a valuable treasure, but holds a terrible curse if used or possessed by a character. The exact nature of the cursed item is up to the Wave Master.

Resources: Island cedar trees (Materials)
Buried Treasure: Buried Trove (Spanish wine (0.2 tons, 300 gp), Livestock (2.1 tons, 75 gp), Clothing (1 ton, 300 gp))
Noteworthy Feature: The island is cursed, causing all who dwell upon it to slowly be turned into different kinds of fish people. The transformation is slow, causing anyone who stays there longer than a month to develop fishy traits.

Resources: Island cedar trees (Materials)
Buried Treasure: Sealed crate of textiles (175 gp)
Noteworthy Feature: An abandoned settlement. Tobacco and sugarcane has been planted, houses and camps built and intact, but completely empty save for a few splashes of blood. Pirates didn’t kill these people, but something did. Setting up a camp here is easy, but encounters are doubled.

Resources: Sea cave (Hiding place)
Buried Treasure: Cache of Barbados rum (12 barrels, 480 gp)
Noteworthy Feature: An abandoned settlement. Tobacco and sugarcane has been planted, houses and camps built and intact, but completely empty save for a few splashes of blood. Pirates didn’t kill these people, but something did. Setting up a camp here is easy, but encounters are doubled.

These are pretty good, combining a lot of the best features of other tables I’ve liked. I like that most islands are inhabited, I like that every island has a secret treasure, and I like the little maps. The only thing that feels “off” is the specificity. When it lines up well, the specificity makes the whole thing come together beautifully (Why does Island 4 have two captains? Obviously there are North and South camps, and they are fighting over the extensive treasure caverns.) But then when it doesn’t line up obviously, it can be tough to make it fit (How is the livestock “hidden” on Island 3?). In other places, I wish there was a little more detail, like about the cursed item on Island 2. The "weighting" of some of the tabes feels off slightly, but I can't put my finger on it.

Are any of the islands giant turtles?

No turtles, but one possible island is a fossilized whale that begins to move again when the characters uncover its calcified heart. Same vibes.

1 I recently caught up with an old friend and we were talking about D&D. I told him about the nautical campaign I was dreaming and he said, “Ian, you need to do that already. You gave me the same pitch in High School.” Now I’m worried because I don't remember that at all.back

2 Or not, as you might know if you’d ever looked for LotFP’s drowning rules. This uncertainty goes some way to explaining, if not excusing the bulk.back

3 Which isn’t to say that this can’t be done well. I quite like the public-domain collages in Johnstone Metzger’s work, and I find that Emmy Allen’s work tends to recontextualize the images enough that they don’t bother me.back