Things That are Getting Me Through

Everyone is experiencing these times differently. I'm fortunate enough to have a job that I can do remotely and to not be alone in my isolation. But here's some of what's been keeping me going, and I hope it can help.

I have a cat. I feed her every day. She sits on my lap and purrs and bites me. 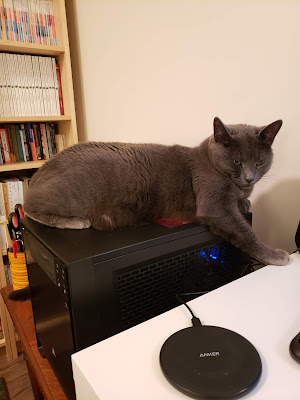 We also caught a sourdough starter. I feed it every day. It has not yet bitten me. 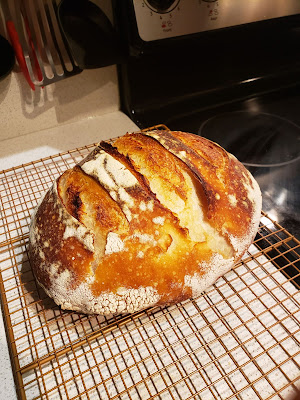 Because I now live what my father has generously called "the life of a scholar", I don't get a lot of sunlight. I find that vitamin D supplements help me sleep better.

I was never a gym person, but the total lack of activity has started to wear on me. I've taken up the seven-minute workout, which I like much better than I thought I would.

The first few weeks without shaving are all terrible scraggly neck beard for me. With nobody to see it, what better time to push through that period and find out what other terrible scraggly facial hair I can grow?

I miss math and I also miss programming. I've taken the opportunity to write a couple of janky scripts: one that generates thumbnails for video files, and one that removes cruft from CBZ and CBR files, shrinks them a little, and converts CBR to CBZ. Use at your own risk, but I am proud of them.

I brûléed a Cadbury creme egg. It's worth doing at least once. 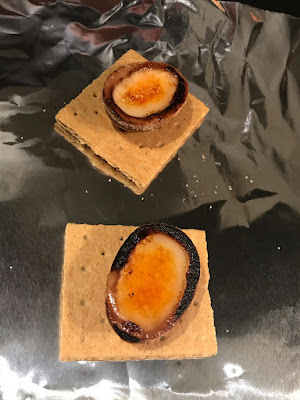 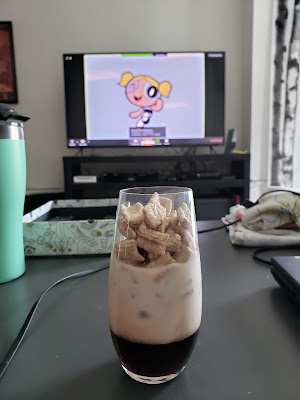 On a smaller scale, we've hosted a few movie nights with distant friends on twoseven.xyz. It works about as well as any new tool, which is to say, plan at least an extra half-hour at the beginning for socializing and troubleshooting. Test what you're planning to do by yourself first.

On Netflix, after The Great British Bake-Off, Terrace House might be the most bizarre and calming show I've found. Six young Japanese adults live in a nice house and get nice cars. There don't seem to be any stakes or anything? They all keep going to their normal jobs and stuff. After each episode, a bunch of enthusiastic commentators remark on all the drama that may or may not have happened. It's pretty good.

Lots of podcasts will keep you informed or expose you to new and complicated ideas. These are (mostly) not those.

Phoebe Judge, host of Criminal, reads a mystery novel one chapter at a time. She started with The Mysterious Affair at Styles, then The Hound of the Baskervilles, and currently The Moonstone.

Recently launched by Mike Wozniak, frequent guest on The Beef and Dairy Network. The usual arc of an episode is roughly: bizarre to sad to cringe to absurd. It's pivoted into the current situation seamlessly by releasing shorter, more frequent episodes, and I think they're stronger for it.

Helen Zaltzman of The Allusionist (same feed) reads odd things in a calm voice, with musical accompaniment by her husband, Martin Austwick.

Josh Gondelman has a single guest on to play a made-up game show, where points are given to answers based on how much they cheer him up. Money is given to charity. Strange motivational speeches are delivered.

Self-explanatory, I think. They've been editing through a backlog recently, so there's a bunch of new ones.

372 Pages We'll Never Get Back

Two of the minds behind RiffTrax read through bad books. My cousin recommended this to me and in exchange I recommended

Jack Shear and Tenebrous Kate read through books that they think the other will enjoy/hate.

James Holloway reads through old monster manuals, a couple entries at a time. I particularly enjoyed the episode about mind flayers, and why they are the perfect 70's Doctor Who villain. Nominally topical!

Life is short. Also have these recommendations, with the understanding that I don't enjoy them any less for having lost the energy to describe them:

When there was less on our minds, my wife and I would set aside days to solve mysteries, things like Sherlock Holmes Consulting Detective or T.I.M.E. Stories. These days we play a lot of LEGO Batman 3, which is good because neither of us is any good at video games and it's fun regardless.

Quarantine has also gone on long enough that I found my old RuneScape account. While my old character is still sitting there in RS3, I've been playing Old School RuneScape, and it's really interesting to start again at the beginning.

I've started playing in a Lasers & Feelings game with a bunch of doctors and it's good fun and breezy. The same group is also getting ready for a more involved 5e game which should be interesting.

I've been playing in a West End Games/d6 Star Wars game and it's wild. The rules can be found online practically by accident, and they're worth a look.

Finally, it looks like I will be GMing again, likely 5e. I've never actually run 5e proper, but I'm hoping I pick it up easily enough. 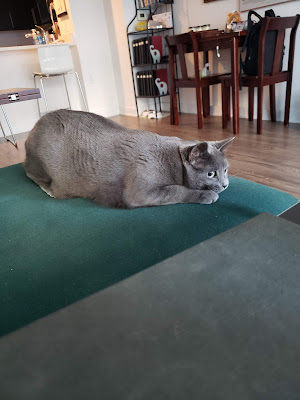